What's a girl to do on a rainy Tuesday which also happens to be our 14th wedding anniversary?  Write a Blog post, of course!

Spring is certainly a crazy busy time of year!  Busier, I dare say, than any other season.  The season starts in January or February when we start some seeds.  I always start my seeds in a timely manner however, they typically don't make it into the ground when they should.  As you may have read, we added to our flock of chickens with a batch of 15 Light Brahma chick.  Unfortunately, they arrived with 7 dead.  The 7 dead chicks have been replaced with 2 extra thrown in for good measure so, now we have 17 Light Brahma chicks and pullets.

One chick from our first batch ended up quite ill.  My chicken vet, aka: Google, lead me to learn about Gape Worm which can be found in areas where wild fowl, such as pheasant and quail, live, aka: New Hampshire!  The worm is picked up from the soil which then attaches itself to the chick's trachea/esophagus and could ultimately suffocate the poor bird.  I treated it with some wormer and in a few weeks later it seemes to be doing much better.  It has been re-integrated with the flock and is stronger every day.  Unfortunately, it seems to be a cockerel.  I only wanted to keep one rooster for this flock and a sickly one won't fit the bill.  Time will tell its fate. 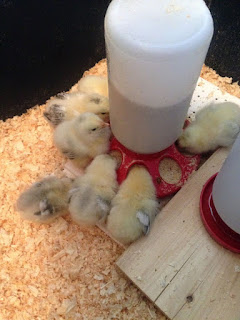 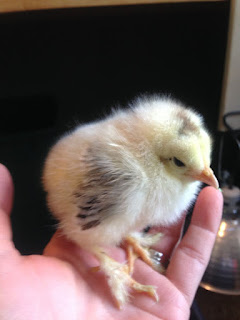 Farm Dad has been spending any and all time working on the barn.  He must really love me because now he has taken our 3 1/2 stall barn and turned it into an 8 1/2 stall barn!  Don't tell him that stalls are meant to be filled with animals!  Not sure how I got so lucky!


Then, amongst all these goings on, our bee nucleus' or "nucs" arrived.  A 5:30 am trip to pick up two hives and we now have seemingly happy bees.  This is my first experience with 'nucs' we (Farm Dad) installed two packages of bees last year and we got lucky enough to end up with 'nucs' this year.  A 'nuc' is an established hive of five frames of bees with a laying queen, brood, and honey cells already.  This gives the bees a head start in production over packages of bees.

With a package, there are literally just bees and a queen in a box.  They get installed to a hive and more than likely have to start from scratch building comb, laying eggs, producing brood, etc.  Building a hive from nothing, obviously takes quite a bit longer than moving into a hive with comb already.

Also, this time of year, we do still have to feed them sugar water but, soon, there will be enough in bloom for them to forage for themselves exclusively.  Cross your fingers we don't manage to kill them again this year!  And YES, I managed to get them installed without getting stung. 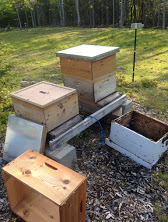 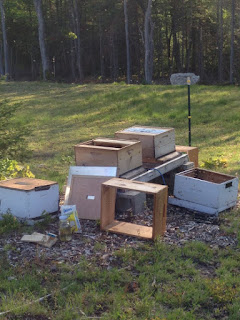 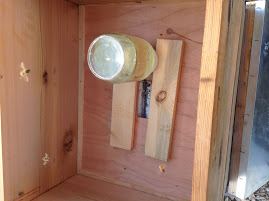 Of course, planting my poor seedlings has taken a bit of a back seat.  I told you I can never manage to get them in 'on time'.  Currently I have some strawberries planted with onions in two raised beds.  Another raised bed filled with broccoli, cabbage, and brussels sprouts.  Yet another bed with sweet peppers, jalapenos, poblanos and eggplant.  Finally, I have two sheet mulched row beds that have tomatoes (slicing and cherry), cucumber, tomatillos, ground cherries, and basil.  Oops, I almost forgot the raised bed with spinach, red russian kale, and dinosaur kale.  Carrots and beets are patiently waiting for me to get to them and I still have to get two more rows in for corn, beans, squashes, watermelons and more.

Since there is always something to do around the farm there will always be something to Blog about.  Let's hope the rain manages to come around on a weekly basis or so that I can take the time to write about our adventures.

Until we meet again.

We look forward to hearing your well thought out and thoughtful comments. Constructive criticism and suggestions are welcome. Mean, nasty or otherwise detrimental comments will be deleted and blocked. Thank you for understanding.